But as usual I’m straying off the point, this post is mean’t to be focused on the varied reactions to the Pope’s pending encyclical. Never before, church leaders say, has a papal encyclical been anticipated so eagerly by so many. With Pope Francis expected to make the case that climate change, unchecked development and over-consumption are exacerbating the suffering of the poor, advocates for the environment and the poor are thrilled.

But the leaders of the Catholic Church in the United States may be harder to win over. At the spring meeting of the United States Conference of Catholic Bishops here last week, bishops from around the country said they were withholding their enthusiasm until they saw the document on Thursday.

Some said they were wary about getting the church enmeshed in the debate over climate change, a contentious issue in the United States. They also expressed concern about allying with environmentalists, some of whom promote population control as a remedy, since the church sees abortion and contraception as great evils. Some bishops said they had received hate mail from Catholics skeptical of climate change. That has added to the bishops’ hesitation and confusion on the topic.

Bishop Oscar Cantú of Las Cruces, N.M., who is chairman of the committee on international justice and peace, said he would remind “so-called serious Catholics” who might want to dismiss the encyclical for political reasons that church teaching was not “Hints from Heloise.”

Francis “will challenge assumptions on both the left and the right,” Archbishop Cantú predicted. “He will call all of us to a wider vision, a global vision, to the globalization of solidarity.” 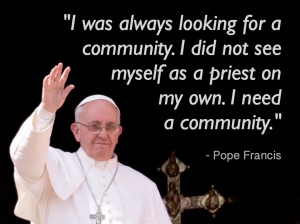 “The Holy Father is being misled by ‘experts’ at the United Nations who have proven unworthy of his trust,” Joseph Bast, the president of theHeartland Institute, said in a statement. “Though Pope Francis’ heart is surely in the right place, he would do his flock and the world a disservice by putting his moral authority behind the United Nations’ unscientific agenda on the climate.”

But climate policy advocates see a scheduled address by the pope to Congress in September as a potent moment — about 30 percent of members of Congress are Catholics, more than belong to any other religion, according to a study published this year by the Pew Research Center.

Speaker John A. Boehner, Republican of Ohio, invited the pope to speak to Congress, but some Catholics say that Mr. Boehner should prepare for some uncomfortable moments. Mr. Boehner, who is Catholic, has often criticized the Obama administration for what he calls its “job killing” environmental agenda.

“I think Boehner was out of his mind to invite the pope to speak to Congress,” said the Rev. Thomas Reese, an analyst at the National Catholic Reporter. “Can you imagine what the Republicans will do when he says, ‘You’ve got to do something about global warming’? ”

In addition, a number of Catholics — including Jeb Bush, Marco Rubio, Bobby Jindal, Chris Christie and Rick Santorum — are gearing up to compete for the Republican presidential nomination, and most of them question the science of human-caused climate change.

Several conservative Catholic intellectuals who expect the pope’s message to bolster the vast majority of scientists who hold that climate change is induced by human activity, including Robert P. George, a Princeton law professor, have published articles reminding Catholics that papal pronouncements on science are not necessarily sound or binding.

Maureen Mullarkey, a painter and writer, said in the conservative journal First Things that “Francis sullies his office by using demagogic formulations to bully the populace into reflexive climate action with no more substantive guide than theologized propaganda.”

Timothy E. Wirth, vice chairman of the United Nations Foundation, said: “We’ve never seen a pope do anything like this. No single individual has as much global sway as he does. What he is doing will resonate in the government of any country that has a leading Catholic constituency.” I have only one response to this & I do believe it is the appropriate one, HALLELUJAH!